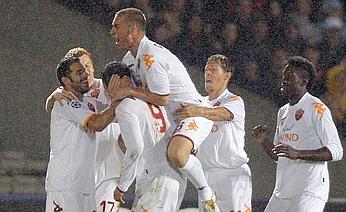 ederico Fazio is suspended due to his red card in Udine, he joins the lengthy list of absentees from the squad, which include the injured Lorenzo Pellegrini, Bryan Cristante, Amadou Diawara, Nikola Kalinic, Henrik Mkhitaryan and Davide Zappacosta.

It means Mert Cetin could be in with a chance of making his full debut for the Giallorossi at the centre of defence. Gianluca Mancini will continue to deputise in central midfield.

Edin Dzeko will lead the line, with Justin Kluivert, Javier Pastore and Nicolo Zaniolo expected to be playing just behind the Bosnian.

Napoli meanwhile will be without coach Carlo Ancelotti, who was sent off in the draw against La Dea on Wednesday.

Right-back Kevin Malcuit is out for six months following knee surgery, midfielder Allan is also out for four weeks with a sprained knee.

The good news is that former defender Kostas Manolas has returned to face his former club, whilst Mario Rui is also expected to return. Elseid Hysaj is struggling with a fratured sternum.

Piotr Zielinski is expected to replace Allan in midfield, with Polish striker Arkadiusz Milik and Dries Mertens set to play up front, with Lorenzo Insigne and Jose Callejon on the wings.

Mertens has a great record against Roma, scoring five goals from his last five games.

However, there are mixed reports on who will lead the line this afternoon, as Hirving Lozano is also in with a shout.